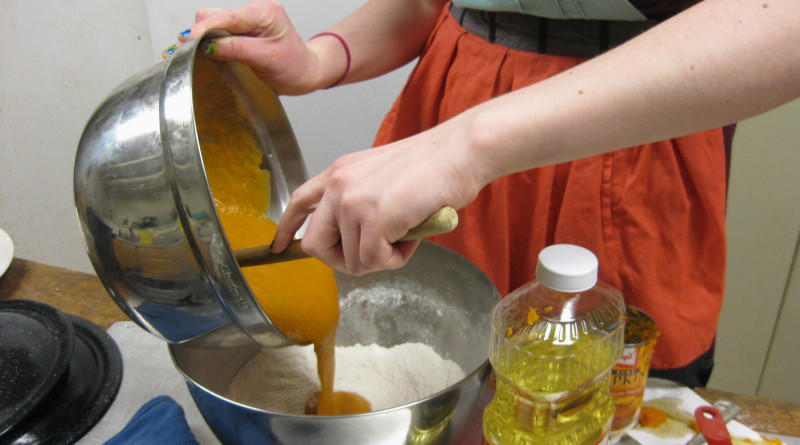 I am a longtime fan of pumpkin. I am admittedly biased, since I was a pumpkin for Halloween when I was two years old and was fated to love it.

Pumpkin is such a seasonal food that it is impossible not to associate with holidays and sweaters and apple cider. One of the best things about cold weather is how prominent pumpkin becomes in all our food. It is a cozy, comforting taste that makes everything delicious.

While studying abroad in London last semester, I found out that they don’t use pumpkin in baked goods or lattes. Instead of accepting this with grace, I yelled about it a lot at parties and bought some overpriced cans of pumpkin at their (very American) Whole Foods.

People in England went crazy for this pumpkin bread. Everybody was initially hesitant to try this, or the pumpkin cookies or lattes I made. Still, despite having no nostalgic feelings about the taste, they loved it.

(Their apple cider situation is another problem entirely.)

This is the pumpkin bread my mom makes, and I guess now I make it too. It’s a staple of my childhood, and something I deeply associate with home and family. To shake things up a little bit, I also added a layer of butter, cinnamon and crushed pecans in one of them, because sometimes it’s nice to try new things. I hope you love it as much as I do!

First, make a playlist. I put on a lot of The Avett Brothers and felt melancholy and hopeful about life.

Choose an apron. I went “style over substance” this week, but you can also “ironic internet slogan” or “serious business chef”.

Then, get together your ingredients. Make sure you have at least two bowls, a microwave, pans, and a can opener for the pumpkin. I’ve heard that you can bake with fresh pumpkin, but I honestly have no idea how. Bake it for a while? Then mash it? Good luck if you decide to do that!

Butter your pans, or spray with Pam for a healthier, dairy-free option.

Mix your dry ingredients (flour, salt, sugar, and baking soda) together. You can use a flour sifter, two forks, or just a spoon. When it looks homogenous, you’re probably done.

Now mix together your wet ingredients (pumpkin, oil, eggs, water) and spices together in your other bowl. Beat the eggs before adding them, but you don’t have to go crazy.

This is the doubled the recipe to make two loaves of pumpkin bread. I usually just use ¼ teaspoons of cinnamon with this, but accidentally put in ½ and it was delicious. I kept the nutmeg the same. It turns out great either way, so it depends on how much you like cinnamon.

Mix the wet ingredients into the dry ingredients. As I said in the donut muffins column, do not mix the ingredients too much. Just make sure all the flour is incorporated. It should be the bright orange color of the pumpkin.
At this point, I sometimes like to add walnuts. It adds a great texture to the soft pumpkin bread, but I understand some people don’t like this, so it’s really up to personal taste.

I experimented with a filling in one of the loaves. I melted butter before mixing it with chopped pecans and cinnamon. Unfortunately the microwave was broken, so I melted some in a pan before giving up on most of it and just throwing it all together. I would recommend a thicker mixture with more pecans and cinnamon. It was subtle, but very good.

Now you’re done with the dough!

Pour half of the batter into one of the pans, half into the other. For this I used loaf pans. I have also made this pumpkin bread in pie tins, which turned out great.

It does not have to be perfect, although try to make it as even as possible. If using the filling, first just pour a little bit of the batter into the pan. Then add the filling on top, before pouring on the rest of the batter.

Put the loaves in the oven. Set the timer for 20 minutes, turn them around, then set for another 20 minutes. After that keep checking (toothpick or fork test) until they are done. You have a lot of time while these bake, so clean up your workspace, do some readings, dance to “Ignition (Remix)” by R Kelly. Actually, just put it on, the dancing will follow.

Now your pumpkin bread is done!

If you buttered the pan correctly, your pumpkin bread should come out if you turn it upside down. Put the bread on a cooling rack for a while.

Once the bread is cool, you can either leave it whole or slice it up for easier distribution. Eat it for dessert or snack or breakfast or whenever, really. It really goes with any time of day.

Notes:
I want to thank Travis Pollen ‘12 , who sent me an e-mail last week with a picture of the cinnamon sugar donut muffins he made. If you end up making pumpkin bread, I’d love to see it!
And special thanks to Katie Ozawa ’13 as well for taking all the pictures.
Thank you so much for your comments!