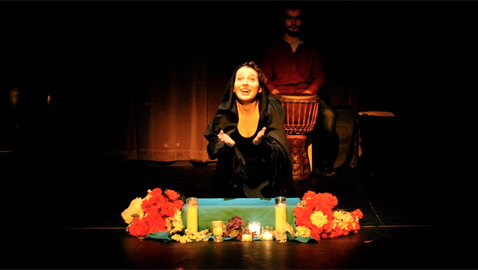 House of Widows pushes beyond the threshold of the contained space its name implies, breaking the fourth wall and calling everyone in the audience into mourning. Lori Barkin’s self-written and –performed senior Solo Performance Thesis begins at a point of rupture in traditional familial order with the funeral of the last patriarch of a Cuban-American family. From there, the piece embarks on the story of how women, left to their own devices, try to put the pieces back together.

Barkin’s piece, in part, proposes an answer to the question: “What is the meaning of theater?” For Barkin, what makes the show so novel is the audience’s participation. The “flesh and blood experience” will “use the audience in a more immediate way than seeing them coldly watch from behind the fourth wall.” This is what makes the audience so integral to the piece.

“It’s called a solo performance piece, but I hardly consider it that,” said Barkin.

In fact, each and every audience member is a widowed woman. Through music, dialogue, poetry, and homage to Spanish poet Federico Garcia Lorca, Barkin’s play explores the rich inner lives and past relationships of the Cuban-American female protagonists.

She chose to portray all the women in the show herself because, she says, “I find a piece of myself in all of them. So it seems fitting to try to embody them.”

Barkin says she drew her inspiration from “an unbridled love for Federico García Lorca,” as well as her own life. She grew up in a house “where Cuban women were constantly coming in and out.” Yet, the show is not autobiographical. Rather, by drawing on individuals and relatives she is familiar with, Barkin has created a caricature of the Cuban-American family. “Fiction can sometimes more effectively communicate reality than an objective interpretation,” she said. “I like magic in a show.”

Correction: The Daily Gazette originally reported Barkin’s play is self directed. Becky Wright is the director.