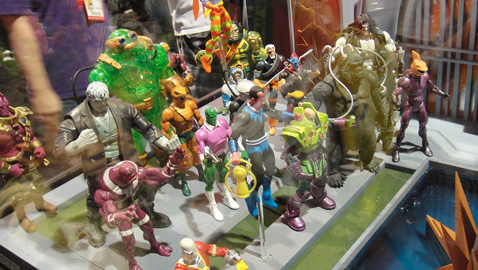 “The idea of being critical about everyday life and the things that we use for fun is an eye-opening part of scholarly inquiry that film and media studies is about. Bob’s range of classes and academic interests really allow Swarthmore students to engage in things that they like to do—but do it in an intellectual and consequential fashion… Since he started teaching here four or five years ago, I’ve just seen students light up.”

Before last week’s lecture, Cookie Dou ’15 sat down with Rehak to talk about the meaning of Comic Con,  fan objects, and 3-D printing.

What is your next book going to be about?

As a Star Trek fan, I have a lot of Star Trek junk around… any collector who is a fan of fantastic media generally has a lot of stuff around. If you go to something like Comic Con you will see people in costume. That’s what I wanted the book to be about—to look at all the ways that fantasy media have these material forms attached to them.

What do you think is the significance of these material forms?

Traditionally, people tend not to think that they’re essential to your experience of these stories. I want to argue that it’s the other way around. The solid forms are very important to how we live with this kind of fiction. You turn your computer or TV off or you close the book and the story goes away… The PEZ dispensers don’t. It’s a material object. It’s what my book is about now.

What about your lecture this coming Thursday?

Essentially, I’m tracing this history where fans of horror media and horror television tend to build these objects which are figures of the Frankenstein Monster, the Wolfman and the Creature from the Black Lagoon… back in the day these were cheap models and now it’s really evolved into this thing where online you can find carefully sculpted statues that cost hundreds of dollars. You can see how it fits into this larger idea.

What got you to write about material forms and fan media?

As a kid, I was into it. As an adult and as an academic, I’m trying to investigate that piece of my own history… [and] do it with critical or theoretical awareness that honors my hobby. Film and media studies focuses on the ephemeral side of media—the images on the screen, film reels… They don’t focus on these objects that are designed to be looked at. I’m trying to intervene.

Is there anything else that you’re going to be covering in your lecture?

3-D printing. I learned about it from a book called “Fab” (by Swarthmore graduate Neil Gershenfeld of MIT). There’s a new class of devices called 3-D printers that sit on your desktop. They print objects by extruding plastic. They weave the plastic together or take raw materials and use lasers and water jets to sculpt them. 3-D printers can also print themselves; they can print pieces to make another 3-D printer. We’re on the verge of another industrial revolution because we’ve found a way to transfer digital data to material form.

How soon do you think 3-D printers will catch on?

I predict that there is going to be a big battle over the types of licensed objects that I’m talking about. Once 3-D printers catch on, probably within the next five years, I think they will be at Best Buy. You can swap 3-D files and print them out at home. You can make your own figurine or Star Wars action figure. Piracy and copyright are all going to be in play. There’s this media culture that has been about building fiction by gluing plastic parts together. I think media studies needs to pay attention to how these branded universes will interact. Actually, there’s this new category called “physibles” on the file-sharing site Pirate Bay. They think this is going to be the next big area for piracy– new categories for torrents used by 3-D printers. There are only a few things in this category so far, but one of them is a fantasy war-gaming figure.

How does the concept of 3-D printing relate to the theme of the importance of material objects in film and media studies?

When we say the word “media,” we don’t think of something that weighs anything… We think of the ephemeral. When you’re downloading, you’re downloading just data rather than something tangible. However, a medium is also a material substance that can be turned into art. 3-D printing is going to materialize media. Media studies need to be ready for that. 3-D printing collapses the text-to-object and object-to-text relationship so that they’re much more fluid.

Do you remember specifically when you knew you wanted to write a book about 3-D printing?

It was the beginning of 2007 during my honeymoon in England. I said to my wife out of the blue, “My next book is going to be about 3-D printing.”

Do you plan on teaching a class about 3-D printing?

I want to wait for the field to mature in order to teach it. I do have a strong suspicion that there will be a convergence between technology and media objects within the next five years. I’ll be surprised if it doesn’t happen. The blogs will be full of debates about copyright. Actually, there’s this iPhone app right now called Sculpteo that stitches pictures you take to make 3-D files that you can send to a 3-D printer. What happens to copyright if I can take a picture of an object and “steal it” to make numerous copies for myself?

How is the book coming along?

I’ve gotten a chapter done and the map of the whole book. I hope by the end of next summer I’ll be able to send out a proposal and a sample chapter. The book’s divided into three areas: model kits, action figures, and war gaming miniatures. But now that I think about it I should also make room for prop replicas such as swords or elvish cloaks made by fans… as you can see, it’s still in process.