Outside the Bubble » Students Organize Campus-Wide Events for Japan 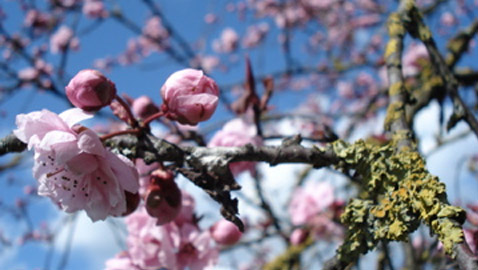 In light of the devastating tsunami in Japan, a small group of Swarthmore students have been organizing a series of fundraising events for the community, ranging from an academic panel to a Cherry Blossom Memorial Service.

The natural disaster in Japan has caused more than 10,000 deaths and $US 235 billion dollars in damage. Fortunately, no one in the Swarthmore community has been personally affected by the natural disaster in Japan. Nonetheless, several Japanese and Japanese-American students all felt emotionally affected by the event and were compelled to do something on Swarthmore’s campus. Mary Prager ’11 describes that they all felt the sense of crisis and emergency and they didn’t want to be alone during this time.

This informal small group of Swatties sees their primary role as raising awareness and encouraging solidarity with Japan.

Michio Taya ’13, a student organizer, said, “As a group, our primary role is to stand in solidarity those who are affected directly by the disaster. Because we are so far away from the situation and came together out of the feeling of powerlessness, our role is to facilitate Swarthmore’s connection with Japan in a larger context as well.”

After a spontaneous meeting Tuesday after spring break, the group started organizing short-term events and brainstorming long-term events. In collaboration with the Swarthmore Asian Organization, the group has been tabling since Spring Break and held a Phonathon/Direct Ask Event, raising a total of $2460 (as of March 25th). The students plan to donate the funds to the Japan Red Cross Society, where 100% of the proceeds will go to relief aid.

The administration has also played a key role in assisting these events. The President’s Office has offered generous funding for the group, and several staff members have spent time organizing these events, including Melissa Mandos of the Fellowship/Prizes Office, Jennifer Magee of the Lang Center, and International Student Adviser Jennifer Gold.

These fundraising and organizing efforts still have their challenges, despite the group’s success so far. Student tabling in Sharples often encounter students who are hesitant to give to Japan, a “rich country.” After Hurricane Katrina hit New Orleans, nonprofit relief organizations received 514 million dollars in donations for the city over the first 7 days, whereas Japan received only 87 million over the equivalent period, according to the Chronicle of Philanthropy.

“It doesn’t really matter if you are rich or poor,” said Taya, “after a disaster hits, there is still a need to help those without food or water.”

“Yes, Japan may be well prepared, but that doesn’t exclude them from that need,” said Miyuki Baker ’11, the de facto leader of the group.

These organizing efforts have solidified the personal relationships among these Japanese/Japanese American students and they hope to charter their group in the near future. The group’s future name and goals are still undecided since group members want the group to be neither purely cultural nor purely political.

“Coming together as a group is really amazing. Unlike the other Asian groups, Japanese students have never had a cultural group, and I felt super nourished and empowered to be doing something with other Japanese students,” said Baker.

As for this upcoming week, the students and Mandos are planning a panel to discuss Japan in a more academic, informative context. According to Prager, professors from various departments, including Modern Languages and Literature, Physics, and Psychology will analyze the situation in Japan through their academic perspectives. Taya described the purpose of the panel as “giving a more academic perspective of what’s happening in Japan, synthesize different components of the crisis, and speak about it on a more intellectual level.”

Upcoming events will also include a Cherry Blossom Memorial Service at the President’s Office on April 2nd and an Art Benefit in Tarble on April 30th.

For full disclosure: the author of this article is involved in a leadership role in the Swarthmore Asian Organization.