Op-Ed » Dealing With ‘The Enemy’ 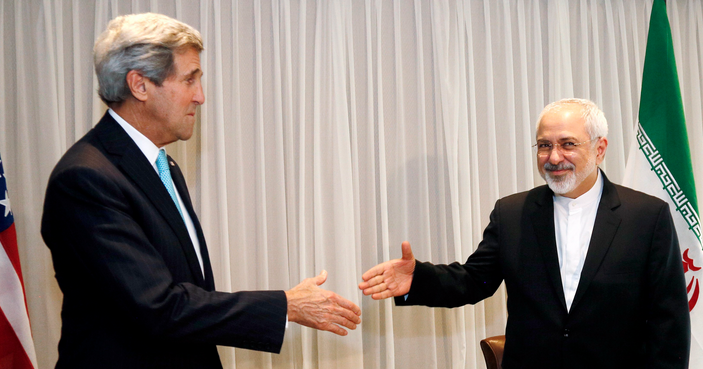 The noun “deal,” according to the New Oxford American Dictionary, means an agreement by two or more parties for their mutual benefit. As a verb: take measures with the intention of putting something right. Both definitions can characterize the motivations of one nation when it must converse with another. Regarding the diplomacy of the United States, the uncompromising belief in both our morality and/or self-benefit have steered policy over the world for the last half-century and likely even longer.

The nature of deals is usually acrimonious. They are the results of reluctantly talking with someone seen as detestable. At minimum, the word suggests stalling solutions rather than solving problems. In short, deals are often the target of disdain among nations. There are definitely some who would cut this irritating diplomacy out of our foreign policy. They would fly our lightning-fast air force over our enemies, firing missiles at unsuspecting ‘bad guys’ in a cathartic frenzy, oblivious to the consequences of such missile-firing. Regardless of the whims of a loud yet hopefully small group of jingoists, deals are here to stay with their two unwieldy definitions. So which one best describes the recent Joint Comprehensive Plan of Action, colloquially called the Iran Deal?

The topic addressed is nuclear capability — implying the right to construct nuclear weapons — which has always been on the periphery of international interest. Desires to thwart the acquisition of such disastrous weapons by so-called “rogue states“ have risen in recent memory. This recent deal focuses on the continuous desire for the Islamic Republic of Iran to develop an atomic bomb, despite the recorded denials of the regime in question.

The agreement was completed in mid-July in Vienna between the UN Security Council and the European Union, led primarily by the United States, and Iran. This is a noteworthy step toward the normalization between the two countries, both of which have belittled and mistrusted each other for decades. Formal relations were severed in 1979, when Iran’s own revolution toppled the American-backed shah. Some historians say the conflict between the two goes back farther to 1953, when an Anglo-American coup put the Shah on the throne to secure our common anti-communist and oil interests. These two opposing countries have had many years to arm. Sadly, this division of growing arms is nothing new.

Since Robert Oppenheimer uttered those revelatory words from Hindu scripture, “Now I become Death, the destroyer of worlds,” the world has been constantly hounded by the fear of complete annihilation. Deals and treaties have become more important to the survival of our species. Interest in them has surged since the end of the Second World War as the world quickly rearmed itself through generous American dollars and Soviet rubles. The previous century taught us that despite the bungling of two behemoths to bring us to a decisive conflict, diplomacy won out. Mutually Assured Destruction (appropriately termed MAD) overrode any belligerent desire to win. A long narrative between superpowers to disarm everyone by everyone else began even as the knowledge of the minute nucleus began to spread, unencumbered by borders. The missiles still lie dormant in their guarded silos—at least so far, and luckily forever.

To summarize, this new deal limits Iran’s enrichment program and extends the period necessary to develop a weapon, estimated at around ten to fifteen years. In exchange for these rigorous limitations, economic sanctions imposed on the country will be gradually lifted.

The war-hawks in both national parties have predictably railed against it. I’ve heard comparisons to the ill-fated Munich Deal, when Chamberlain brandished an affidavit declaring that Hitler would not launch a second European conflict. Needless to say, Chamberlain was very wrong. Following the flimsy historical metaphor, a new Iranian disaster threatens to engulf America and the Middle East with essentially Obama’s tacit approval. The Israeli prime minister, Benjamin Netanyahu, certainly shares this sentiment with fellow hawks stateside. He calls the deal, “a historic mistake for the world,” no doubt emphasizing world to make everyone wake up and notice. Bibi and the imperial patriots on this side of the pond would preferably like to see the end of any Iranian interest in atoms; no doubt with CIA agents censoring chemistry classes in Tehran classrooms.

Other politicians, while not sharing the tendencies of their hot-blooded colleagues, also disagree with the lack-luster result. A Democratic Senator from New Jersey said that the deal would make Iran, “flush with money,” leading it, “to further pursue their destabilizing hegemonic goals in the region.” This is a serious concern. We Americans should know how destabilizing hegemonic motives can be; we’ve had nearly a century of practice at it with mixed results.

The quality of the deal has been severely scrutinized. Cadres of journalists, political commentators, ethno-socio-religious activists, and news anchors weigh the merits and faults. Alan Dershowitz, a noted lawyer and Harvard professor, has already contributed a small book to the debate. The title clearly shows which side he stands on: The Case Against The Iran Deal: How Can We Stop Iran From Getting Nukes? The black cover — marked by a pair of white dice painted with radioactive and peace symbols — doesn’t leave room for misinterpretation. This deal is a gamble, and there is a chance that we will lose. Losing though leaves no chance for a second roll of the die.

I give Mr. Dershowitz credit for coming up with his own hypothesis and provocative cover in a short time-frame. Yet this publication is only part of a broader trend demonstrating the spite many Americans feel for the results of diplomacy nowadays, particularly with people we are predisposed to dislike by media or history. Foreign treaties seem to be shackles rather than extensions of national power; we must free ourselves to do as we wish with hostile nations, presumably to fuel our F-22 Raptor jet engines for immediate takeoff from the USS _____ (insert any well-known president’s name here).

Being stalwart liberty lovers on our best days, we sometimes find difficulty in accepting the delicacies of diplomacy, albeit justifiably. We also jump too quickly to what’s bad about something in order to score political points or feed our feelings. Sometimes, poorly thought out deals confuse and entangle more than help. (I’m thinking of you, Mr. Chamberlain.) But when the alternatives are worse or do not exist, then that which remains must be accepted as the best option. We do not have a solution, but we have something as opposed to nothing. Nothing means more splitting atoms and more harassment for a beleaguered world tired of being paranoid. Perhaps we have achieved some benefit for the region and ourselves, a chance to move beyond the constraints of past blunders. Otherwise, we may have just temporarily altered the balance of power. Then is it a moral victory? Too soon to say.

Decades of bombastic rhetoric claim we have the might, no, the right, to use guns and bombs to rebuild all the world in our image. Along with all that belligerence, there was the undercurrent of speaking face-to-face with our mortal foes. Maybe we can live up to Thomas Paine’s rhetoric, but that day will not come if we do nothing and let the world keep spinning. We gotta make it come. Typically with more coherent, understanding, mutual deals that hold both parties to terms. After all, this country is too big to ignore the world and too big for the world to ignore it.

As for the world’s perspective, take a note from Mr. Bismarck: “God looks after drunks, little children, and the United States of America.”