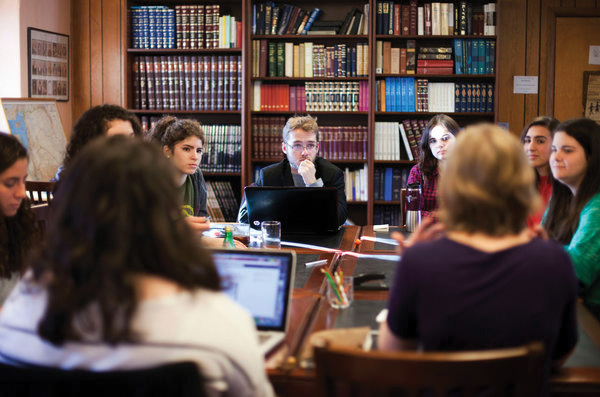 Swarthmore Hillel’s board voted on Monday to change their name after receiving an email from Hillel International that threatened legal action against the student organization if it did not change the agenda of an upcoming event so that it aligned with Hillel International’s Standards of Partnership. The student group decided to remove “Hillel” from its name so that it could proceed with the planned event, where four activists will be presenting on the Israeli-Palestinian conflict next week. The name change will also ensure its autonomy in choosing guest speakers and future topics for discussion.

In a press release, Swarthmore Hillel said that the decision to drop “Hillel” from its name was made “in order to affirm [our] central Jewish values of openness and inclusion across differences.” Keeping the Hillel name “would prevent us from continuing to build that inclusive community we want to be,” wrote Joshua Wolfsun ’16, Swarthmore Hillel’s Israel-Palestine Programming Coordinator, via email.

Still, the decision to drop the Hillel name was a difficult one.

“For many of us, we identified with the Hillel name — either as a link to the larger Jewish student community, a connection to Hillel the Elder — the organization’s namesake — or quite simply as just what we have always called ourselves,” Wolfsun wrote. “As an organization that claims to promote pluralism and Jewish life in all its forms, it is deeply disappointing and frustrating that Hillel International has responded to our attempts to create an open and pluralistic community by threatening to sue its students and their college.”

Wolfsun reported that the Dean’s Office had been in contact with the student group, and had been “helpful and supportive” of the student-led decision-making process.

The meeting, which lasted two hours in Bond Hall, was attended by Jewish members both inside and outside of Swarthmore Hillel who discussed which aspects of Hillel they valued and desired to keep. Students also expressed concerns for the group to address going forward, such as feelings of exclusion and unilateral thinking. Having more diverse guest speakers with differing viewpoints is meant to address this issue.

According to its press statement, Swarthmore Hillel has yet to decide on the new name, although it will be chosen in the coming weeks, and the entire Jewish community at Swarthmore inside and outside of the organization will be invited to participate in the selection process.

Hillel International opposes programming that presents an anti-Israel view in any of its affiliated Hillel organizations. As part of a series on social justice issues on Israel and Palestine, Swarthmore Hillel scheduled a discussion entitled “Social Justice Then and Now: Lessons from the Civil Rights Movement” with civil rights veterans Ira Grupper, Mark Levy, Larry Rubin, and Dorothy Zellner. Ira Grupper was involved in a 2009 march in solidarity with Gaza victims of Israel’s January 2009 siege. Mark Levy is a civil rights activist who regularly speaks to college groups about the relevancy of the Civil Rights Movement to the Israel-Palestine conflict. Larry Rubin works with groups in Washington D.C. and Baltimore connecting the Black and Jewish communities. Dorothy Zellner was the co-editor of the civil rights newsletter “The Student Voice” and is now involved in advocacy work on behalf of Palestinians. They are scheduled to speak about their experiences in the American Civil Rights Movement and its applicability to the current conflict in Israel and Palestine next Tuesday and Wednesday.