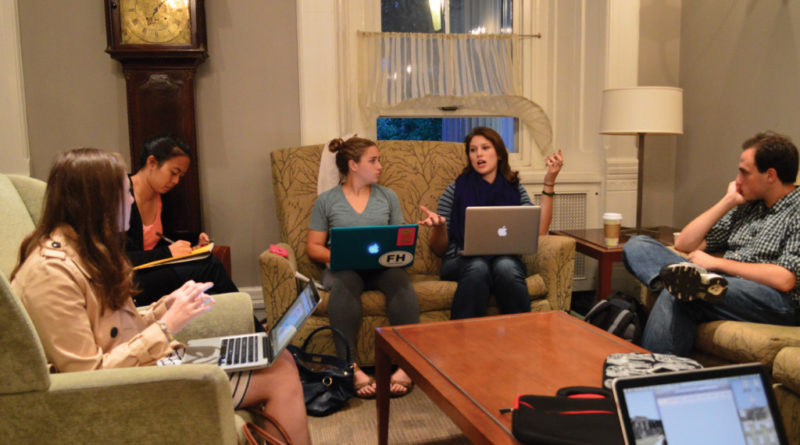 At their last meeting, Student Council (StuCo) discussed a variety of measures to improve communication between students and college institutions, in particular by fostering better relationships with Public Safety, committees, and the StuCo members themselves.

To facilitate a better connection between students and Public Safety, the members of StuCo discussed the “adopt-a-dorm” program, where each public safety officer will be connected with a dorm and will have “meet and greets” with the residents.

As for their own communication with the student body, StuCo discussed possible strategies for using “Small Steps Forward”, the suggestion box StuCo uses both on their bulletin board and online.

Indeed, one suggestion StuCo received recently asked that the committee work to make sure parties are smoke-free. Financial Policy Representative Razi Shabann ’16 stated that the parties should already be smoke free and this is a rule that should be enforced by public safety and PAs.

The new PA system would entail a basic training for all PAs and different branches of training that PAs would specialize in. The new program would also entail a safety plan for all parties, including basing the number of PAs on the space, not number of attendees. Each space, such as Paces, would have a number of required PAs who would be present at each party held in the space.

StuCo also hopes to streamline other committees, too. The group discussed dissolving committees on which students do not have a say or confidential committees that contain student representatives. The College Judiciary Committee, which is already in the process of changing, will be replaced with a new body that is more logical and beneficial.

The Off-Campus Study Committee too will be assessed, given recent complaints from students that credits from their studies abroad do not transfer in the way they had hoped, leading them to have to make up for it by taking five credits per semester.

To further facilitate the changes and alterations they hope to make, StuCo plans to formally establish a Student Senate, which will have its own constitution and representatives from the large organizations on campus. Different campus groups and constituencies, including the Intercultural Center and Black Cultural Center, Greek life and student athletes, will have representatives in Student Senate.

The senate will help StuCo tackle additional issues as well. Currently, the agenda ranges from acquiring more colored printers and scanners to having professors post their office hours online.  StuCo members are looking into making the system for professor’s office hours standardized across all departments.

Capone also raised the idea of reinstating “Disguide”, an older Tri-Co version of “Rate My Professor,” where students could anonymously review professors.

Finally, StuCo discussed something more lighthearted, having a college-wide riddle of the week.  Each week, students will have the opportunity to answer a riddle. Five people who get the right answer will be entered into a raffle to win a prize.