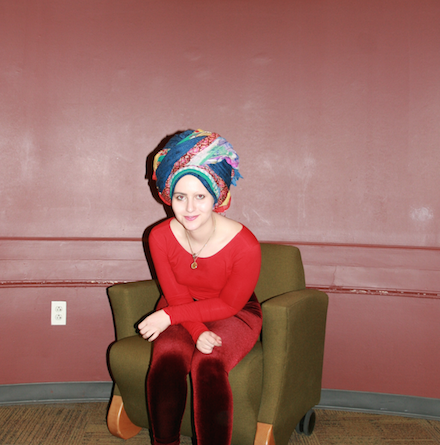 It is very easy to locate Lila Weitzner ’19 in the bustling crowd of Sharples at 6:30 p.m.. Her splendid head wrap, colorful crop tops, high rise leggings, and heels separate her from most of her fellow Swatties. People have described Weitzner’s style as “grandma prostitute chic”. A lot of clothes she wears are like dance clothes — items that show the shape of her body. She also loves bold colors and embellishments like embroidery or beads. When asked about how she developed her style, Weitzner said that it largely came from her need to define herself before people defined her. Weitzner lost her hair and one eyebrow in 3rd grade because of an autoimmune disorder called alopecia. Her hair came back a little bit during 6th grade and has been “on-and-off” since then.

“I felt like I was floating for most of the time. There’s no partially bald girl in the media, and barely any in the real world. I had nothing to hold on to to tell me what I should look like. There’s no beauty standard I can aspire to. So the burden is completely on me—I need to rely on myself to figure out what it means for me to be beautiful”, Weitzner said.

Growing up in Washington D.C., Weitzner spent a lot of time taking public transportation and being watched by strangers.

“I’m always perceived by the world. People make decisions about me”, Weitzner said. She can’t remember how many times people assumed that she had cancer or she was a member of a punk rock band who wanted to look different for the sake of looking different. “But first of all, I’m perfectly healthy. Second of all, I’m more ‘normal’ than people think — I do hate the system we live in and all the oppression, but I’m not necessarily anti-establishment,” said Weitzner with a little chagrin. The reactions she received from people were not always negative. Instead, Weitzner said walking around partially bald made her “the subject of so much kindness.” She remembers that people always came to her and praised her for her braveness because they mistakenly assumed that she had cancer. However, Weitzner said such kind gestures somehow placed her in a tricky position.

“If I just simply accept their kindness, I’m being dishonest. But if I correct them and tell them the truth, they might think that I feel very insecure for not having hair, and then they feel bad for calling attention to it, even though I recognize the good intention behind their actions,” she explained.

Colorful head wraps and clothing allow Weitzner to present herself the best way she can. She loves the fact that people see courage and triumph in her, but she doesn’t want people to make incorrect assumptions. Instead of being “hardcore” or someone’s “inspiration,” she wants her outfit to be able to brighten someone’s day. To Weitzner, her distinctive style is a way to celebrate her body, one that might not be conventionally beautiful and thus may not be celebrated. She feels good about her body, and she wants people to know it.

“It’s totally okay if some women don’t celebrate themselves this way. But I see a lot of women trying to do that but lacking the audacity to actually dress to be proud of their bodies! I really want to help them! They might just need to fold their shirt in a little bit or wear a belt!” Weitzner’s pitch got higher as she got excited when talking about offering fashion advice.

“Am I feminine enough?”

Like most of us, Weitzner has not always been satisfied with her body. She has mixed feelings towards many aspects of her body: when she first hit puberty, she found it difficult to find bottoms that could fit both her hips and her waist. While her wide hips gave her a classically-feminine figure,  Weitzner was frustrated by the fact that she didn’t have large boobs or long hair, two other elements closely associated with femininity. In middle school, she was confused by the unsolicited attention from men complimenting her on her body. Unaware of any standards of femininity that lay outside of the mainstream, Weitzner said she couldn’t tell if it was sarcasm.

Weitzner said she only learned to fall in love with her own body around 9th grade. She went to Duke Ellington School of the Arts, a school with a majority Black student body. Weitzner said this was the first time that her body type, and more specifically her curves, had been close to the beauty standard. Around the same time, White American culture started adapting and appropriating the predominantly Black beauty standard valuing female bodies with big butts and hips.

Weitzner said this was when she realized that there was no single beauty standard. Different body types are celebrated more or less in particular times and places, but the reality is that there are limitless ways to be beautiful.

As Weitzner started college at Swarthmore, she sometimes felt disconnected from her body. Weitzner said her busy schedule makes it impossible for her to dance in her room in front of the mirror or put on body lotion after she showers.

“My body has been changing so much all the time. That’s why I really want to feel my present body. Appreciating my skin and knowing someone else will also appreciate it makes me so satisfied. When choosing my outfit, I feel more expressive and more beautiful if I have a little part of my stomach or back exposed. It’s not even about look. I just want to touch my skin and have more control over my body. I want to see my food baby after a big meal,” Weitzner explained.

At the same time that Weitzner has been on a journey to happiness with her body, she has gotten older and been exposed to more catcalling based on her appearance. Weitzner says she finds some irony in the fact that her body, which she used to worry about not being feminine enough, is consistently considered by strangers to be attractive. But the incidents of catcalling themselves, Weitzner finds problematic.

“Am I feminist enough?”

Yes, we all hate the over-sexualization of the female body. Yes, we hate catcalling as it reinforces the notion of male entitlement to female bodies, and the oppressive rape culture that this supports. But if a woman feels good when someone tells her she looks hot, is she somehow not feminist enough? Is sexism already deeply coded in the way we think? Are we being “vain” and trying to please men when we dress up? And, most importantly, how do we navigate ourselves through all these moments of self-questioning?

When I raised these questions to Lila, she sighed and paused for a few seconds.

“So many forms of oppression have been telling me that I shouldn’t feel good about myself. I don’t identify with the kind of feminism that makes me turn my back on things that make me happy. Dressing up and being pretty is my way of celebrating myself. Who created the idea that valuing my appearance means I want to please men? I want to have control over how people perceive me. Knowing that the way I look has impact on people is empowering.

“There’s an idea that caring so much about my appearance means I’m not confident enough of my natural beauty, and that always makes me feel not sure about wearing makeup. But the fact is that the shame around makeup is just the world trying to make me feel less powerful.

“How are you going to tell women that if they care about how they look, they are not ready for serious business, but at the same time pour all the bullshit on women about the right body type? Are we just going to accept that we’re not beautiful and we can’t redefine beauty? Discovering my natural beauty doesn’t mean not putting any effort in it. ‘Natural’ is to listen to myself and to be authentic to myself. Celebrating myself is celebrating so many versions of me. Fashion is what allows me to do so.”

Weitzner expressed similar thoughts on the topic of women’s bodies. Weitzner believes that with the cultural fascination with the idea of a “strong woman” comes a push for women to have more muscular bodies. She finds this a little bit unsettling.

“My body is very flexible. Recently, a doctor told me that hyper-flexibility will give me limitless athletic ability once I get stronger. No one had ever told me this before! People don’t tell me that I’m strong and athletic just because I’m curvy and I don’t run very fast.” To Weitzner, it doesn’t make much sense that women are told to get stronger by acquiring stereotypically masculine qualities instead of being told to recognize the qualities they already have as strengths.

Weitzner suggested that we think about these topics a lot so with the ultimate goal of thinking about them less. She hopes that in the future, when she chooses to wear something pretty and ‘revealing’, she won’t have to go through the process of thinking, as she says,  “People are going to yell, but do I care?” She wishes she could simply look good and feel good without shame.