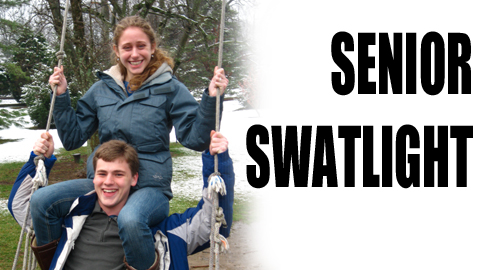 Over breakfast on a snowy Saturday morning, I chatted with Stephanie Black-Schaffer and Glenn Stott about their experiences at Swat and their plans for the next step – more importantly, their recent engagement. Because I’m engaged myself (to Hana Lehmann ’13, who joined us for breakfast) I definitely enjoyed hearing Glenn and Steph’s stories. In the spirit of Valentine’s Day season, we hope you will as well.

Screenplay! Our first interaction was to trade excerpts. And then we almost got together sophomore year.

Ah! It was tragic!

We had been running buddies, and we had been talking about things on runs. I should have done this in person, but…

But do include that explanation. I asked Stephanie out, and then I also sent an email afterwards about the elephant in the room.

Which was that he liked me.

And Stephanie sent a reply email. I don’t know why, but SwatMail didn’t forward it to my Gmail. I didn’t get it. So I thought that she thought it was an awkward email, and just archived it or whatever. And she thought that my non-responsiveness to her email was like an “alright, I’ve moved on” kind of thing.

So what happened, then? How are you together now?
We got together the first day of junior year.

Wow. Just straight off, “you’re back, I’m back, let’s do this?”
I was going to wait, but Stephanie… (laughs) She mentioned that she was going to “go on a walk” with somebody else, and I knew that this was code for something else, so I had to change my timeframe drastically. I was thinking, “Drat! This isn’t going to work!”

Well, I had given up on junior year, so I was thinking, “Hmm! There are other fish in the sea…” Nope.

So for the entirety of sophomore year you stopped talking?
No, no, we were still friends, we just didn’t talk about that. We still went on runs.

What do you think that says about you guys?
Well, in our defense, we both started dating other people pretty quickly, so we were off the table. It wasn’t really something we could talk about.

When we finally got together, all our friends were saying, “This was happening for a while. We were just waiting for you to figure it out.” But, they didn’t choose to tell us.

Oh, I told all my friends that I was in love with Glenn since freshman year, and that he was always unavailable, or I was unavailable. And he didn’t say anything to the same set of friends, so they only knew my side of the story. And they never told him. Which surprises me. I kind of assumed that they had, I assumed he knew, but nobody told him.

Well, all’s well that ends well. So where are you now? What’s happened?
Well, the big thing is that we’re planning to get married in summer of 2013.

That’s a good time to get married, from what I’ve heard. So when did that happen?
Well, there’s my version, and then there’s Stephanie’s version.

Let’s hear both versions.
(laughing) The romantic version: Last summer, Steph and I went to this cabin in Canada that my family built. It’s a tradition that any prospective addition to the Stott family has to go through a vetting process, which includes going up to this cabin with no electricity, and no running water. If you can get through this satisfactorily, then you, you know, are admitted to the family.

So Steph and I went on a walk up there, and talk changed to talk of the future, and we kind of skirted the issue of getting married and instead couched it in really awkward vocabulary, like “if we were ever to possibly think about maybe getting married, and if that were to happen at all, just hypothetically asking…” And so as this conversation started up, I realized that I had all these reasons — I wasn’t going to get married straight out of college, and I wasn’t going to propose… or at least, the end of college marked the point where I could start doing all those things. But I realized that I knew that I wanted to marry Stephanie, and there was no reason not to tell her that. So that was the first proposal. On a rock.
Stephanie’s version is a little different.

So we’re in Canada, and there’s no plumbing and no electricity, and we’re going on a walk, and I’m like [feigning weeping] “Glenn, I’m a little worried about our future,” because I’m really worried, [continuing the weeping] “’cause if we’re not going to get married until you get a job, that could be six years down the road, and what if you get a job and you don’t have time to get married, and them I’m going to be thirty-something when we get married.” And then he said “Stephanie. Will you marry me?” And I was like [sobbing] “Yeeessss!”
Super romantic, right?

This is the dreaded question: What are you going to be doing next year? What do you want to be doing?
I have final call-backs for the American Conservatory Theater program, in March. Right now, that’s the dream school.

And I’m hoping to be a teacher!

Have you felt comfortable at Swat being engaged? What’s it been like? Do you feel welcome? Or do you feel that you are looked at funny now? Are people talking to you about it? Is it easier to be engaged or is it easier to be dating?
My roommate is super psyched about it. She’s been registered on TheKnot.com since she was thirteen. But otherwise, no, not really. I’ll mention it to my friends back home and they’re like, “Whoa, engaged.” Friends here are perfectly nice about it. But, they aren’t there yet.

I have trouble picking up on social cues. So I don’t know when people are really weirded out about it. It hasn’t been terribly weird. The one thing I think is strange is introducing Steph as my fiancée instead of as my girlfriend. I feel it’s a weird line because we’re pretty young going into this…

There’s this — and maybe it’s just in my head — there’s this perceived skepticism from some people. Especially when you come in and say, “Oh, well, this is my fiancée.” And the initial reaction tends to be a little bit of “good luck with that.” And so that’s the one area where I think the vocab becomes really important.

This may be an awkward question, but do you guys fight?
Yes, okay, so this is the thing… ooh, how much information to give? Yes. But this is part of the reason why we are so sure this is going to work. Because every time we get into an argument it’s always a really helpful argument. It’s something that was going to happen at some point and we always work through it. Even if there are angry words exchanged, we always explain that “I was coming from here…” and “You were coming from there…” We try to use “I” statements. It doesn’t always work. I don’t think we’ve ever had an argument where we didn’t walk away thinking, “Oh, I’ve learned something.” They aren’t senseless.

I think fights are generally considered a bad thing. But I think if you don’t fight, there is something strange going on. If you aren’t sad sometimes, being happy means less. You can start to forget how lucky you are.